THE HOLY METEORA AND ORTHODOX MONASTICISM

The contribution of Orthodox monasticism as an authentic witness and expression of our ecclesiastical tradition is immense and of great importance for the salvation of human society and the universe as a whole. It is a well-known fact that monks pray constantly for the salvation of all; it is also well known that they contribute a great deal to society, either through the various ministries they perform or through the philanthropical work of the monasteries. Thus, monasteries have always played an essential role in social and spiritual life as they have been an important factor in their development.

The monk, in a spirit of self-denial, takes up the sweet cross of total obedience to God’s commandments and the orders of his abbot. Through observing the commandments, and particularly the two most important ones – to love God with all one’s heart and soul and to love one’s fellow men in similar fashion – he joins the ranks of the angels and partakes in Divine Grace. His angelic way of life makes him a source of blessing and a model worthy of imitation. By imitating monks, those living in the world have a positive effect on the social reality of the outside world.

A monk’s life is devoted primarily to divine worship and unceasing prayer, the noetic prayer of Jesus. The central place for prayer in Orthodox monasteries is the katholikon, the main church of the monastery, where – in a spirit of profound penitence, ‘with pure souls and blameless lips’ – the monks worship the Triune God and pay homage to the saints. Apart from this, the monk, recalling the ascetic struggles and labours of the holy fathers before him whose ascetic endeavours were so pleasing to God, zealously applies himself to the holy struggle against the passions and the temptations of this world. His struggle will last a lifetime and will always be governed by obedience to his elder’s instructions and the performance of his monastic duties.

Monasticism first appeared in the Holy Meteora in the late 12th century. At that time, there were hermits leading ascetic lives in cave dwellings that were accessible by ladders. Soon, however, they were to become organised into a lavra, with the kyriakon (main church) of Panagia Doupiane as the centre of their devotional life and the Protos of the Skete of Stagoi as their spiritual overseer. The 14th century saw the foundation of the large Meteoran monasteries. In 1340 St. Athanasios of Meteora occupied the ‘Platylithos’, the rock which he was to name ‘the Meteoron’ (i.e. the rock suspended between heaven and earth), and went on to lay the solid foundations of cenobitic monasticism at the Meteora. Bringing with him the core elements of the hesychastic movement, of which he was one of the most prominent leaders, the saint would infuse the cenobitic regime on the steep rocks of the Meteora with elements of the hesychastic and mystical life. The saint’s testament came to be the founding charter of Meteoran monasticism. The Monastery of the Hypapante (Presentation of Christ in the Temple) was founded by the Protos Neilos in 1362. The imposing ‘Rock of Barlaam’ was occupied in the 14th century by the ascetic Barlaam, a contemporary of St. Athanasios, and Barlaam was to give his name to the homonymous Meteoran monastery. A decree by Symeon Uroš Palaiologos (1362) mentions, in addition to the Monastery of the Great Meteoron, the Monastery of the Holy Trinity, which shows that the latter was at that time an organised monastery.

During the reign of Suleyman I the Magnificent (1520-1566), more of the Meteoran rocks came to be inhabited and new monasteries were established. One example of the latter is the Monastery of St. Nicholas Anapausas (1527), which was founded by the Metropolitan of Larissa, St. Dionysios the Merciful († 1510), who was to spend the last few years of his life there as a monk, and the hieromonk Nikanor, Exarch of Stagoi († 1521/22). In addition, Saints Nektarios († 1550) and Theophanes († 1544), the so-called ‘Apsarades’ (Apsaras brothers), also sought a place to strive for their ascetic perfection on the rocks of the Meteora. Initially, they were allowed to settle on the ‘Stylos tou Prodromou’ (Pillar of St. John the Forerunner). Later, however, in 1517/18, they settled – now on a permanent basis – on the arid ‘Rock of Barlaam’, where they built a majestic katholikon (1541/42) dedicated to the All Saints. During this period the brothers Joasaph and Maximos from Ioannina, following the example of their fellow townsmen Nektarios and Theophanes Apsaras, obtained permission from the topoteretes (bishop’s deputy) of the Diocese of Stagoi, the Metropolitan of Larissa St. Bessarion II, to settle on one of the Meteoran rocks. They were granted use of the ‘Rock of Roussanou’. According to the testament of Joasaph and Maximos, who founded the Monastery of Roussanou on this site, they completely rebuilt the monastery’s ruined katholikon (14th or 15th cent.), which was dedicated to the Transfiguration of the Saviour. Also, through the provisions of their Diatheke (Testament), they introduced a strict cenobitic regime in the monastery. As for the Monastery of St. Stephen, two monks of this period are mentioned as being its ktetors (founders): St. Anthony (1st half of 15th cent.), whom a later tradition has associated with the Byzantine Kantakouzenos family, and St. Philotheos from Sthlataina or Sklataina. Shortly before 1545, St. Philotheos completely rebuilt the monastery’s small old katholikon.

During the almost seven centuries of its life, the Meteoran Thebaid was to experience successive periods of decline with few intervening periods of prosperity. The history of the Meteora, by and large, is a history of difficulties and persecutions, despite which the monks managed to keep alive the flame of the Orthodox faith and tradition.

The inclusion of the Meteora in the UNESCO World Heritage List in 1988 and Greek Law 2351 of 1995, which declared the Holy Meteora to be a ‘sacred, immutable and inviolable’ site, represent the two most recent landmarks in the long hesychastic tradition of the Holy Meteora. 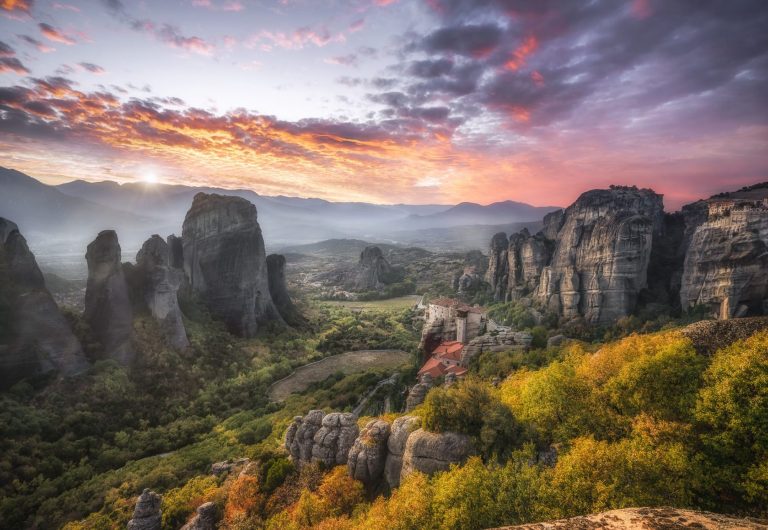 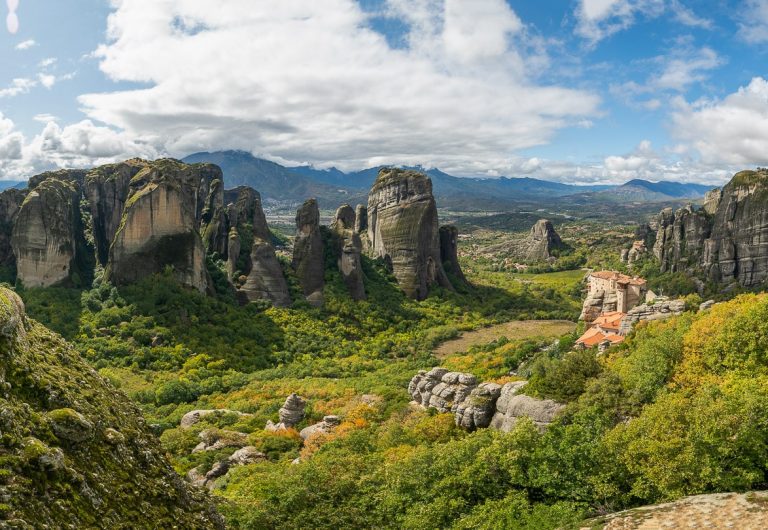 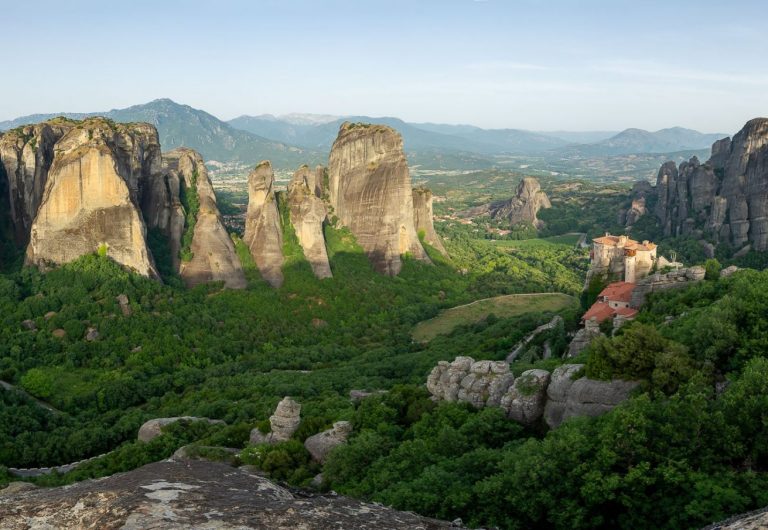 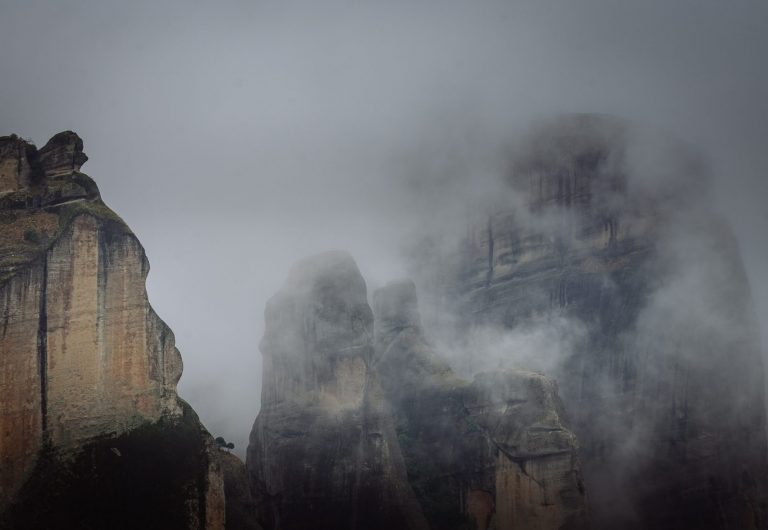