The holy life of St. Athanasios of Meteora is recorded by his biographer, the monk Neilos Stavras of Hypsilotera Monastery (1390). The composition of the saint’s Life only a few years after his repose is a clear indication of his disciples’ belief in his virtue and saintliness.

The text notes that: ‘Having distinguished himself, he was not shown to be bereft of gifts from God, but partook of [the gifts of] foresight and prophecy.’ As time passed, the veneration of St. Athanasios increased. In 1483 the monastery’s old katholikon was decorated with frescoes and St. Athanasios and his successor, St. Joasaph, were both depicted as haloed figures holding scrolls in their hands. A little later, between 1490 and 1526, the learned hierodeacon Ioustinos Dekadyos from Corfu composed a service in honour of St. Athanasios. In the monastery’s Typikon (1580), the monk Christodoulos notes that: ‘On 20 April we commemorate our blessed founders Athanasios [and Joasaph] / who established our monastery, which is called Holy Meteoron. / We perform a vigil on the previous evening.’ In 1707 the Life of St. Athanasios was translated into the vernacular by Neophytos Christopoulos from Tyrnavo, a monk at Iveron Monastery on Mount Athos. The abovementioned facts indicate that the veneration of St. Athanasios was widespread in the 18th century. There is no doubt that the saint was to play a pivotal role in the development of monasticism in the entire region.

An important figure in Athonite and, later, Meteoran monasticism is St. Gregory of Constantinople, or ‘the Stylite’, St. Athanasios’s spiritual father. Owing to the constant pirate raids, in about the year 1333 St. Gregory left Mount Athos, accompanied by his fellow ascetic Gabriel and his novice Athanasios. The three of them later settled at the Meteora, on the Stylos (Rock) of the Holy Spirit. Gradually St. Gregory’s reputation as an ascetic spread, attracting many men to his hermitage seeking to benefit from his teachings and example.

One of St. Gregory’s greatest disciples, who was also a fellow ascetic of St. Athanasios, was the hieromonk Anastasios.

All the information we have about this virtuous monk comes from the few lines written about him by St. Athanasios’s biographer. From this short passage it is evident that St. Anastasios attained great heights of virtue. Such was his humility that he did not wish to receive a normal burial after his death; instead, he ordered his fellow ascetics, under pain of penance, to throw his body, emaciated by his ascetic struggles, to the wild beasts immediately after his repose, the date of which he evidently knew about, possessing as he did the gift of foresight. In the end he was given a proper burial, and, what is more, by St. Athanasios himself, who was ‘a virtuous and duly venerable man.’

During the almost seven centuries of its continuous monastic witness, the Meteoron, as a school of holiness, was to produce a plethora of saints. These were the kind of men that St. Nikodemos of the Holy Mountain describes in his divinely inspired service for the Athonite saints as being men who ‘avoided the unnatural, preserved the natural and were deemed worthy to receive the supernatural gifts.’ Although the names of most of these saints remain unknown, since they sought to remain in complete obscurity, the monastery’s long history preserves the memory of many saints whose names are known. For example, the abovementioned Life of St. Athanasios preserves the names of a group of saintly ascetics who, under the spiritual guidance of St. Athanasios himself, attained great heights of virtue, in imitation of their spiritual father. This group included the hieromonks Gabriel, Gregory and Iakovos, whom St. Athanasios considered to be worthy of the priestly vocation, and St. Makarios, whom St. Athanasios appointed as epistates (supervisor) and spiritual father of the brotherhood before his death. Special mention should be made of Saints Ignatios and Agathon, who, as elders with their own brotherhoods, submitted themselves, along with their own disciples, to the spiritual authority of St. Athanasios.

Athanasios was succeeded by St. Joasaph, who also became a second founder of the monastery. At about the age of twenty, Joasaph – formerly John Uroš Palaiologos, who had been proclaimed joint king of Serbia with his father Symeon Uroš Palaiologos – like the good merchant in the Gospel, exchanged his royal robes for a poor monastic habit, disregarding the need to continue the glorious Nemanjid dynasty. After placing himself under the spiritual authority of St. Athanasios, Joasaph rapidly ascended the ladder of virtue. Athanasios himself appointed him as his successor. After his elder’s repose, St. Joasaph was to play an important role in the monastic life of his time. In fact, he is known to have spent various spells on Mount Athos. During his time at the Great Meteoron, the original Church of the Transfiguration of the Saviour would grow both in size and grandeur, while as a result of his initiatives, the monastery would be enriched with treasures of great value.

In the mid-16th century the monastery was ruled by the hieromonk Symeon from Epirus, who was originally a monk at the Monastery of St. Panteleimon in Ioannina. Polykarpos Rammidis maintains that, after his ordination as a priest, Symeon underwent a trial period of seven years at the Great Meteoron before Nikodemos, the abbot at that time, placed him in charge of the monastery, selecting him for his great erudition and virtue. After Nikodemos’s death Symeon was appointed abbot.

During this period another great figure was to leave his mark on Greek monasticism. This was St. Dionysios of Olympus, who was tonsured as a monk at the Great Meteoron.

An important figure of the late 18th and early 19th centuries was the hieromonk Parthenios Orphidis from Trikkala, who served as abbot of the Great Meteoron and was also a church composer. Abbot Parthenios, who may have been a pupil of Anastasios Rapsaniotis, head cantor in Larissa, left behind a splendid musical legacy. 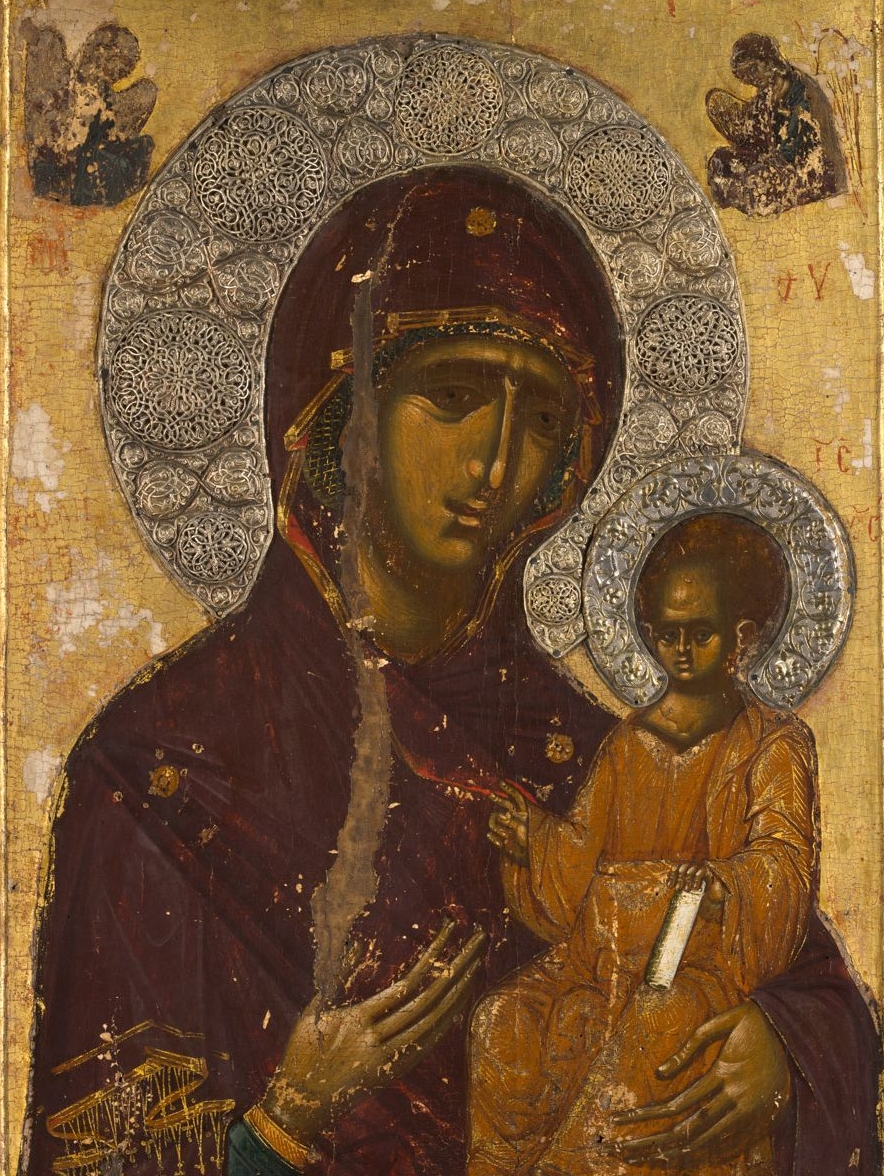 ‘First of all, I entrust you to the protection of the most blessed Mother of God and ever-virgin Mary, just as the monastery is also dedicated to her; having trusted in her, I have until now wanted for nothing. I hope that through her intercession and by grace I will be saved.’

The Monastery of the Holy and Great Meteoron holds an abundance of holy relics and icons, including relics from the Lord’s Passion, such as fragments of the crown of thorns, the lance, the sponge and the cloak, as well as part of one of the hands of St. John the Baptist, the incorrupt right hand of St. John Chrysostom, a fragment of the sacred skull of St. John the Theologian, the incorrupt palm of the child-martyr St. Kerykos, and the sacred skull of St. John Climax. Among the monastery’s miracle-working icons stand out those of the Panagia Loxadiotissa (12th-13th cent.) and the Panagia Kanaliotissa.

THE TYPIKON OF THE GREAT METEORON 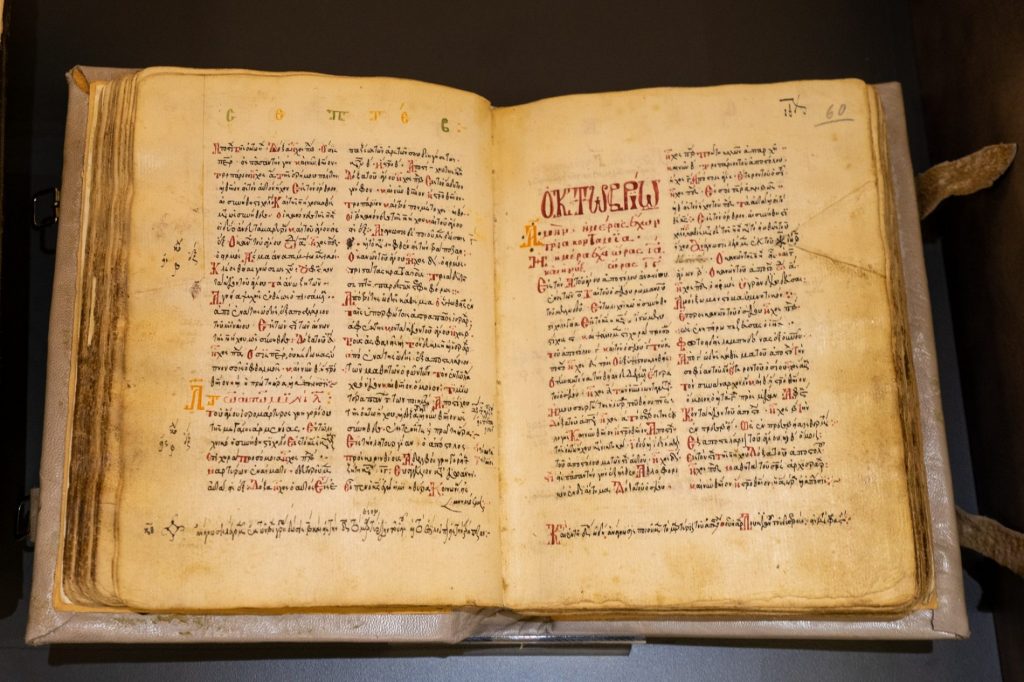 As is well known, typika (books of monastic rules) hold a very special place in monastic life. Liturgical typika contain provisions and instructions on the daily offices and the feast-days of Christ, the Mother of God and the most prominent saints. They contain two interdependent calendars of feasts: the calendar for movable feasts and that for immovable ones. This is because, in the course of time, special devotional and liturgical practices develop in monasteries which are organically incorporated into the structure of their typika. In the case of the Great Meteoron, these practices are recorded in Codex 83 from the year 1580, which was written by the monk Christodoulos. This manuscript includes the monastery’s typikon, which clearly deals primarily with liturgical matters, although it also includes numerous provisions and counsels governing the conduct of the monks. 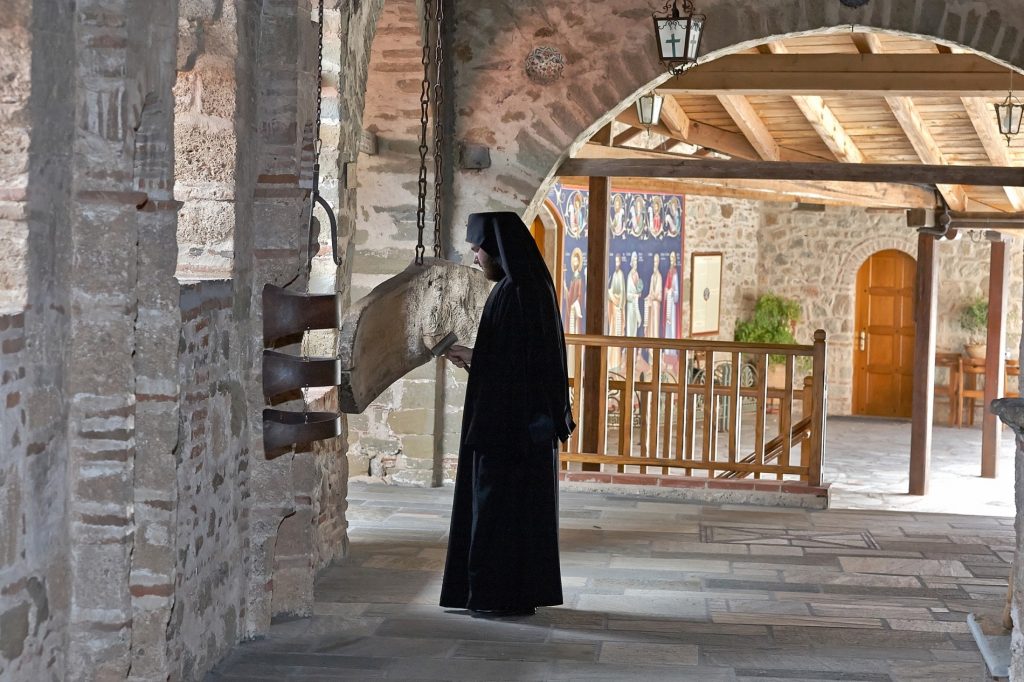