THE HERMITAGE OF ST. ATHANASIOS

The Monastery of the Great Meteoron was founded in about 1340. To the left of the monastery entrance survives the hermitage of St. Athanasios of Meteora. It consists of a cave that was converted into a dwelling and a place for prayer. Now renovated, it functions today as a chapel. According to St. Athanasios’s Testament, the monastery was dedicated to the Panagia Meteoritissa of Petra. Tradition holds that the monastery’s church lay inside the cave. 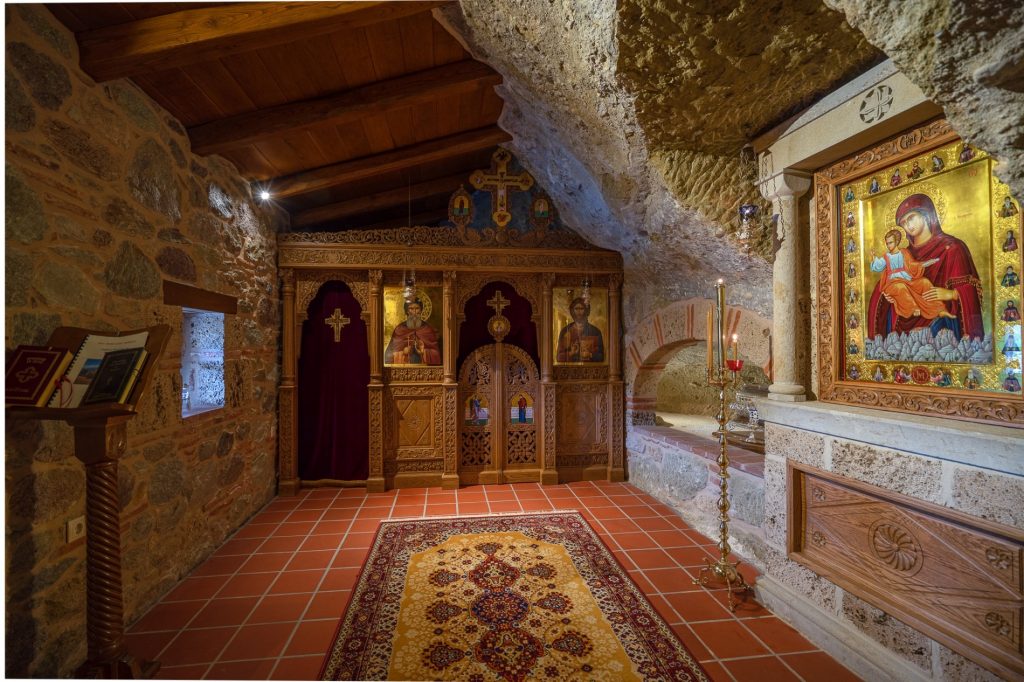 St. Athanasios’s desire to found a cenobitic monastery along the lines of those on Mount Athos required the construction of a new katholikon. Thus, with the aid of a Serbian ruler – most probably Symeon Uroš Palaiologos – a church was erected in honour of the Transfiguration of the Saviour. 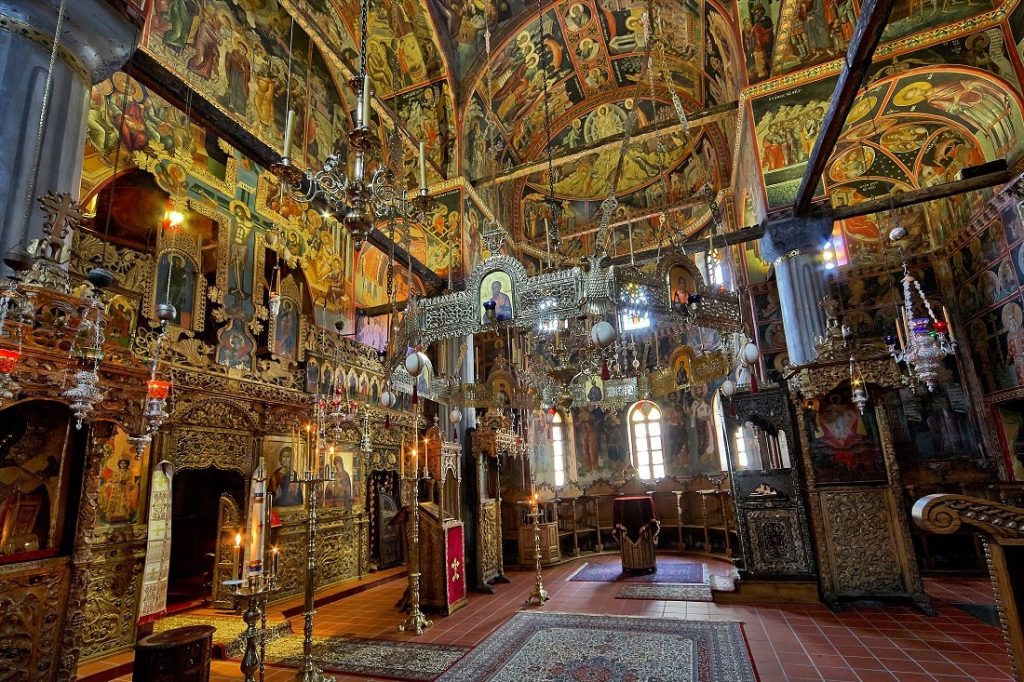 This katholikon, which was probably a transverse-vaulted building, was to be renovated a few years later by St. Athanasios’s successor, the former king Joasaph Palaiologos (1350-1422). The year in which the church was renovated is indicated in an inscription in the window of the sanctuary apse (on the capital): ΕΤ(ΟΥΣ) ,ϛω/ϟϛ [6896=1387/8]. An extensive building programme was undertaken at the Great Meteoron Monastery in the 16th century, at the initiative of the abbot St. Symeon, the third founder of the monastery. During his abbacy, work began on the construction of a new katholikon, which was completed in 1544/45. 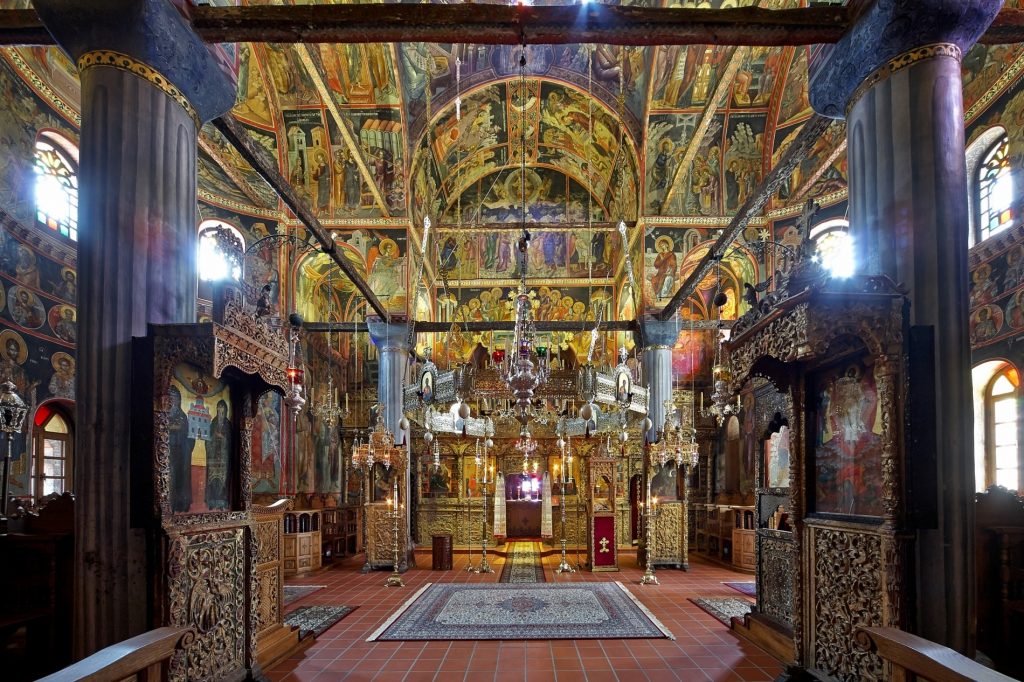 In terms of architectural type, it was a complex four-columned cross-in-square church. It can also be characterised as an ‘Athonite’ type of church as it has ‘choirs’ and a spacious columned lite. To the north of the katholikon a gallery was created with cruciform piers, now covered by a wooden roof. Here one can admire the large suspended wooden semantron (a beam struck to summon the monks to prayer). 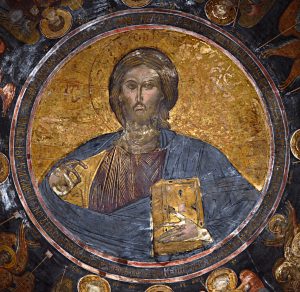 The visitor/pilgrim will be impressed by the well preserved wall paintings by the famous ‘Cretan’ painter Tzortzis, who appears to have been recommended to Symeon, the abbot at the time, by the Metropolitan of Larissa, Neophytos II, a nephew of St. Bessarion.  Also worthy of admiration is the carved and gilded wooden iconostasis in the katholikon. Its present form dates from 1791, when Parthenios Orphidis the Melodist was abbot. In front of the iconostasis, on the right-hand side, is the icon-stand bearing the miracle-working guardian icon of the Panagia Meteoritissa (14th cent.). Another miracle-working icon lies on an icon-stand in the lite of the katholikon: this is the ancient icon of the Panagia Loxadiotissa. In the same area lies the tomb of St. Athanasios, together with the holy relics of the monastery’s founders. 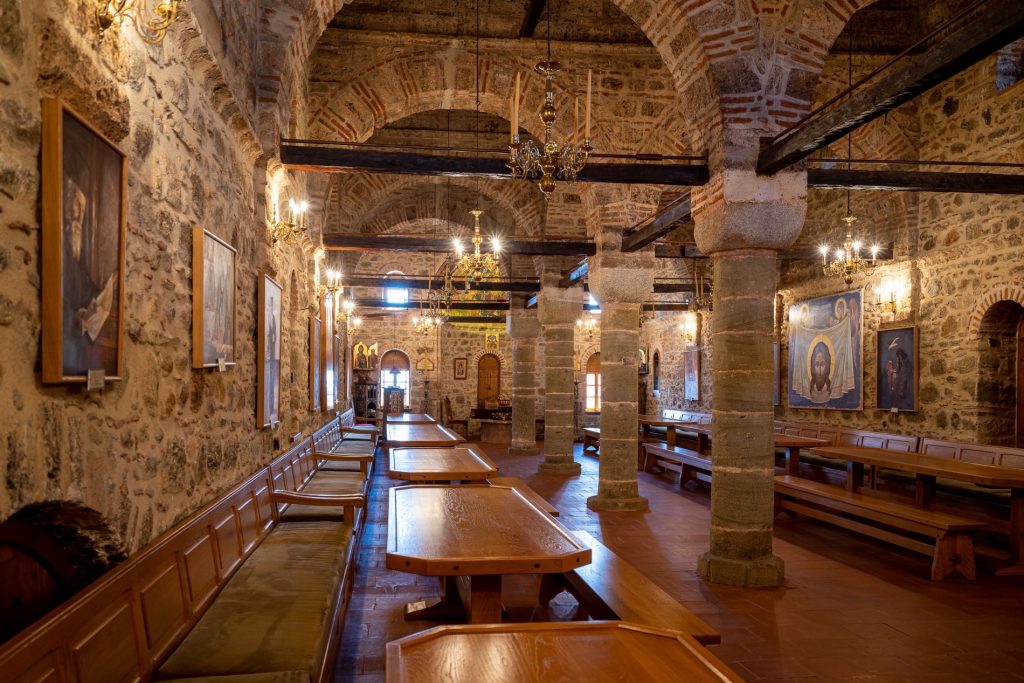 Architecturally, the refectory of the Great Meteoron (1557) is regarded as one of the finest of its kind (it preserves the monolithic round-edged table of the abbot). The building, which was donated by the abbot St. Symeon of Ioannina, is a long, narrow rectangular structure, with an apse at the east end. A row of five drum columns running down the middle of the building supports the superstructure, which consists of a wide variety of vaults (groin, sail and scaphoid vaults)

It is worth noting that the refectory is adorned with two very old candelabras that were evidently in use during the time of the founders Athanasios and Joasaph. They are very valuable, being rare examples of ecclesiastical fittings from the Byzantine era.

Next to the refectory, to the north, lies the monastery’s hestia or kitchen, which is built in the conventional monastic style. The hemispherical vault of the ceiling is crowned by a small dome, whose windows allow the smoke to escape. In the middle of the kitchen there is a large trivet on which a sizeable kazani or cooking-pot was placed. 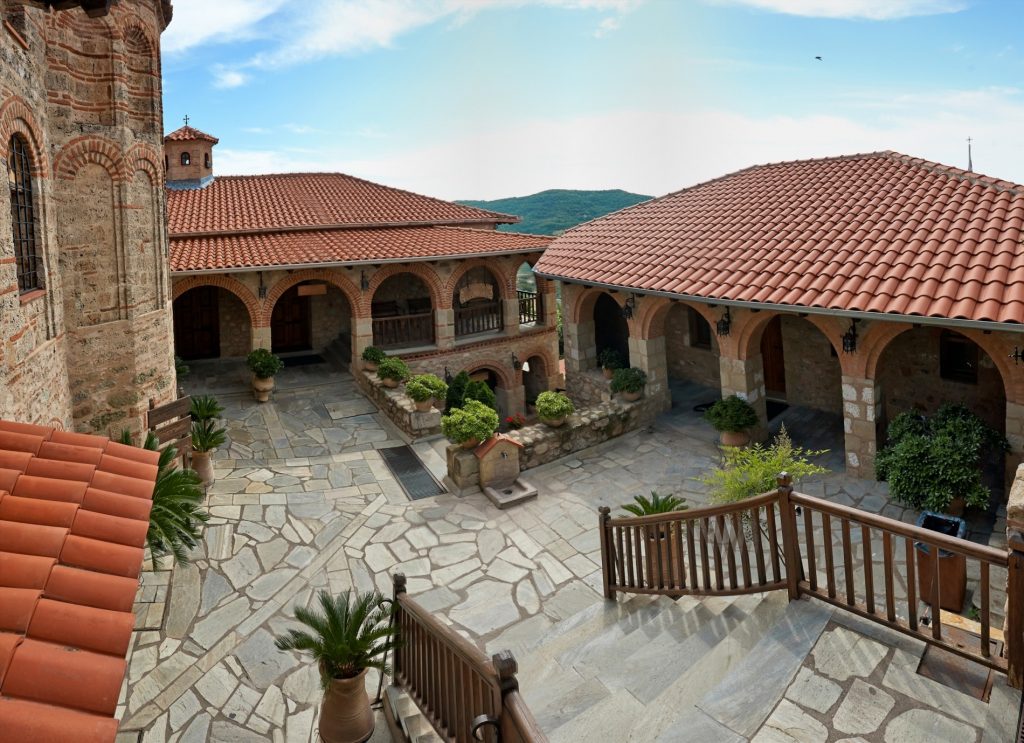 In July 1572, according to the brick inscription set in the wall, the monastery’s two-storeyed infirmary/nursing home was built. The building was vaulted with a hearth in the centre and an arched gallery. In the mid-19th century it served as a storeroom. However, the present building is the result of a recent restoration. Today both the ground floor and the first floor are used as a museum for sacred treasures, manuscripts, icons etc.

The Monastery of the Holy and Great Meteoron, as one of the oldest and most important monasteries in Greece, holds a large and notable collection of Byzantine and post-Byzantine icons. More icons of similar date are preserved in the monastery’s katholikon and chapels, while others still are on display on the ground floor of the museum. 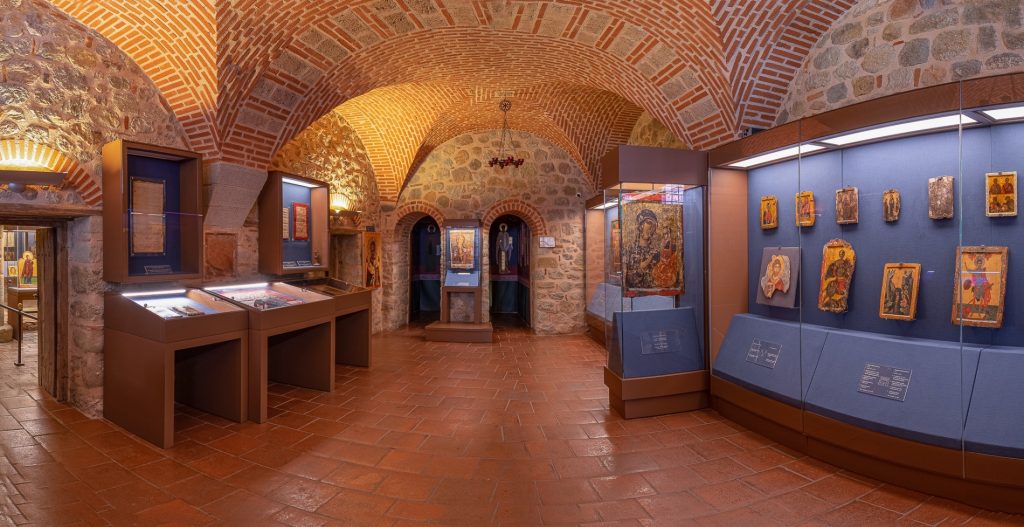 The oldest of the Meteoron’s Byzantine icons date from the 13th century. These are the miracle-working icon of the Panagia Loxadiotissa, which has already been mentioned, and the icon of the Virgin Hodegetria, which has been associated with St. Athanasios. Two other icons also hold an important place in the monastery’s history: those donated to the old monastery by Maria Palaiologina (1360-1384), St. Joasaph’s sister. In the same area a number of icons by famous painters are also displayed, such as those by Theophanes the Cretan and Tzortzis. 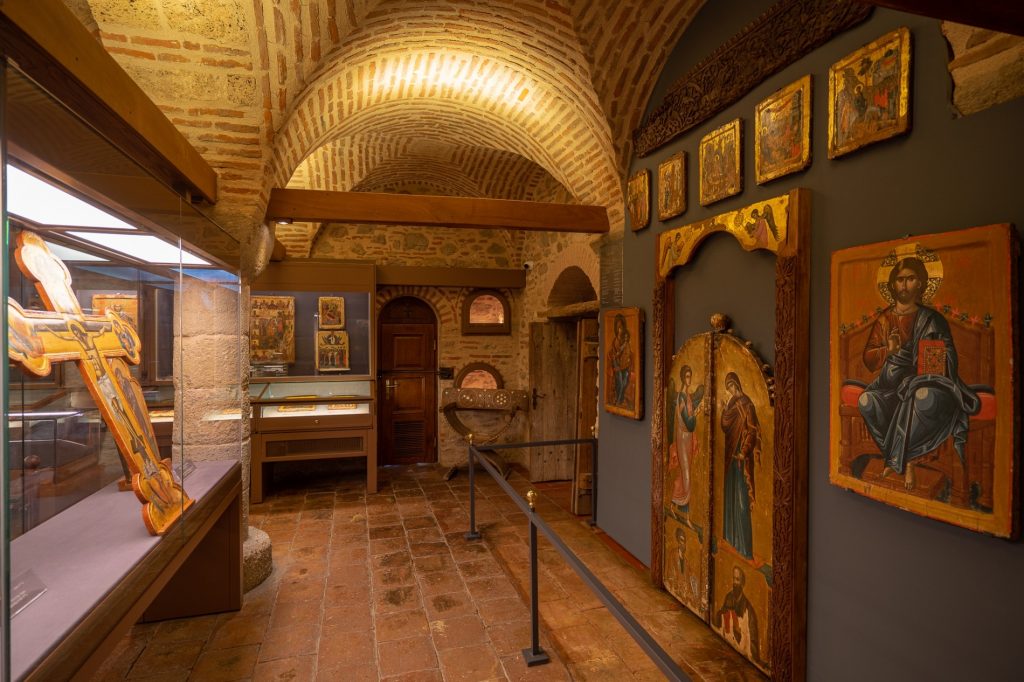 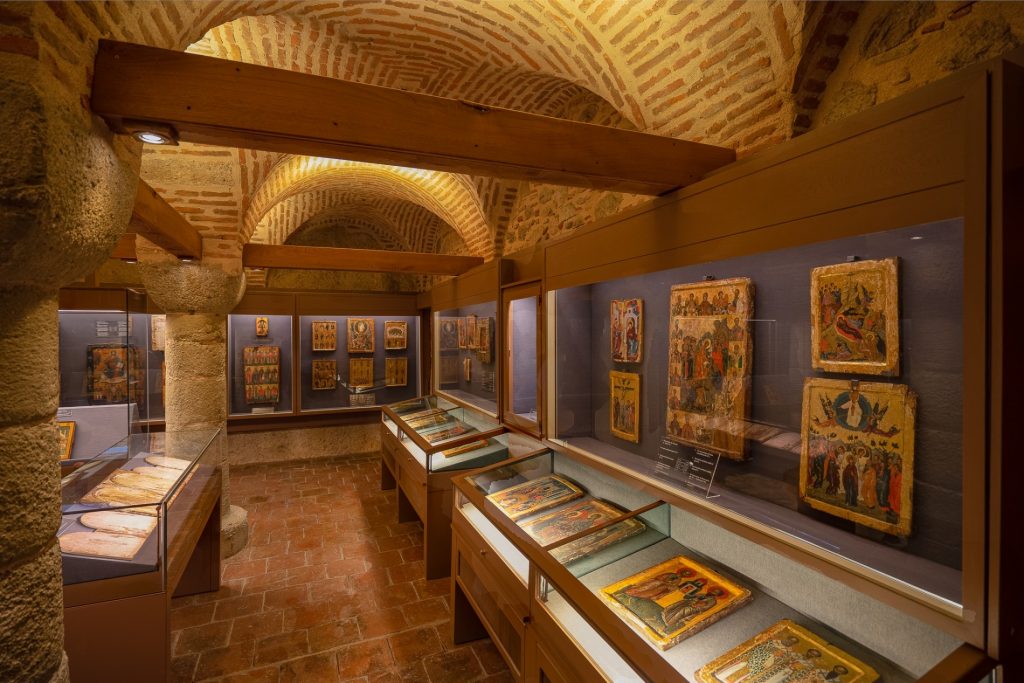 On the first floor of the museum there is a large display of manuscripts and some twenty liturgical scrolls. Also of great historical value are the parchment scrolls with the liturgy of St. Chrysostom, copied by the scribe Gabriel (12th cent.). 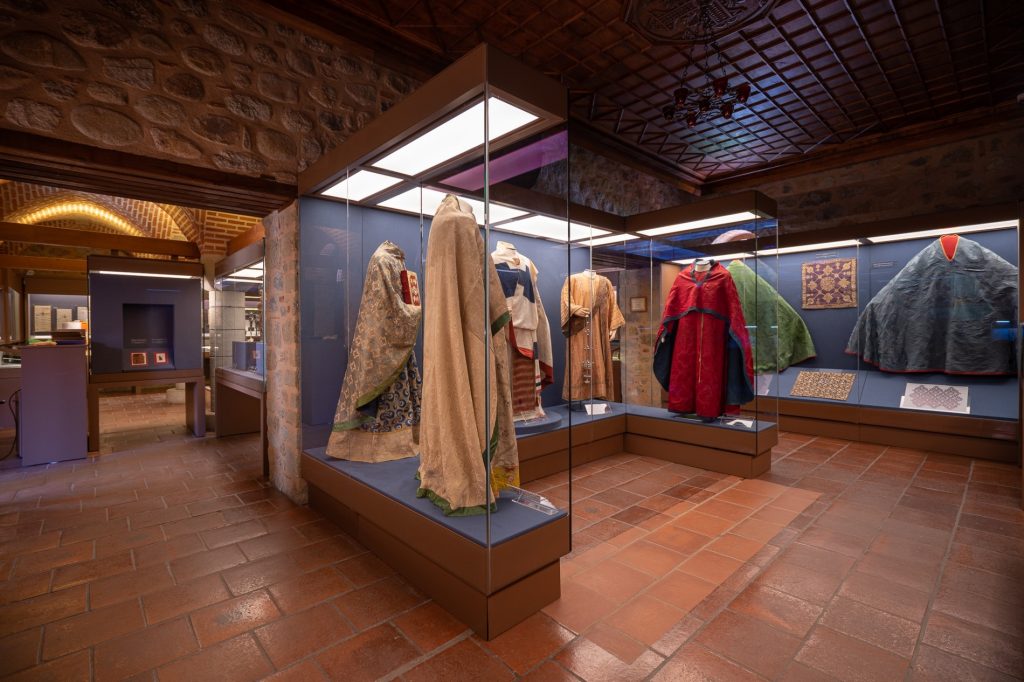 The oldest of the monastery’s manuscripts – and the oldest dated manuscript in Greece – dates from the 9th century. This is the famous Codex 591, containing the homilies of St. John Chrysostom on the Gospel of St. Matthew. This manuscript was written by the monk Eustathios in the year 861/2. Another important manuscript is Codex 106 (9th/10th and 16th/17th cent.), which preserves a number of inserted miniatures of the Evangelists on parchment. From the year 1088 there is a parchment codex with homilies and letters by the Church Fathers, written at the Chora Monastery in Constantinople. In 1385/6 Codex 555 was produced with the financial assistance of Joasaph, one of the Great Meteoron’s founders: ‘the present book of the Meteoron was written with the aid and at the expense of the king and most venerable of monks kyr’ Joasaph, by the hand of the chartophylax of the most holy see of Trikala, the priest Thomas Xeros.’ Also, there are numerous manuscripts that were dedicated by Joasaph, Metropolitan of Larissa, another great benefeactor of the Meteoron.

Alongside the theological and liturgical manuscripts, there are also a number of codices containing works of secular literature. These mainly comprise works by ancient authors, such as Homer, Hesiod, Sophocles, Demosthenes and Aristotle, although there are also some literary works of more recent date. The latter include philosophical, chronographical and grammatical texts, collections of medical writings, epistolaries and mathemataria and, rarely, prose or verse texts in the vernacular.

Also of great importance is the collection of incunabula (rare early printed books) printed in Venice, particularly those produced by the illustrious printer and humanist Aldus Manutius (editiones aldinae). For example, the collection includes works of grammar, such as Apollonius Dyscolus’ On Syntax (1495), and lexicons, such as the Suda (the 1499 edition by Demetrios Chalkokondyles and the 1523 edition by Varinus Phavorinus, ‘printed with care and corrections by Zacharias Kalliergis the Cretan’). Other important works in the collection are the plays and other literary works from antiquity, such as Theocritus’ Idylls, Theognis’ Gnomai, Hesiod’s Theogony (in a 1495 edition by Aldus Minutius) and the tragedies of Sophocles (also in an edition by Aldus Minutius, dated 1502).

On display in the museum’s showcases are an ivory plaque dating from the 10th or 11th century, and two lead koutrouvia (myrrh flasks) from the shrine of St. Demetrius in Thessaloniki. 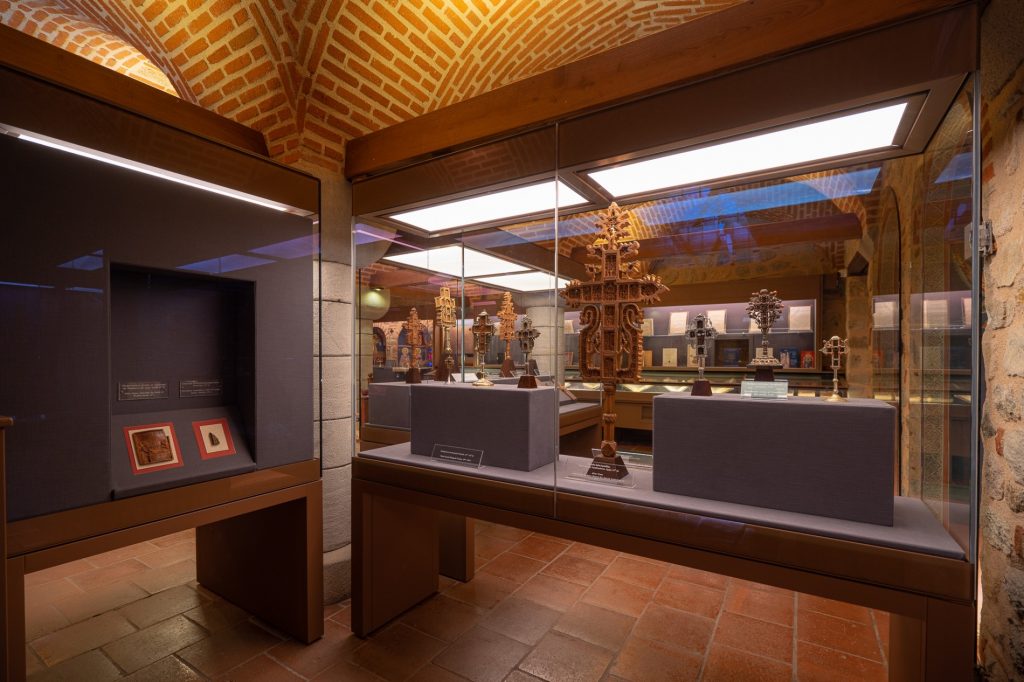 Also on display is a series of carved wooden crosses, marvellous examples of patience and skill, as well as a number of holy vessels, such as the Late Gothic chalice (15th cent.) whose rim is adorned with six applied silver reliefs executed in the champlevé technique (the enamel has fallen out).    Another of the oldest and most important treasures of the Great Meteoron is the katsion or standing censer. The oldest part of the censer can be dated to the late 14th or early 15th century.

Particular mention can be made of the monastery’s large epitaphios, which dates from the 14th century.

In the middle of this sacred shroud lies the figure of the dead Christ, while in the corners are depicted the symbols of the Evangelists. The museum also displays a finely designed and executed Late Byzantine epitrachelion, which is associated with St. Joasaph’s time at the Great Meteoron.